We try to know each other and understand own feelings.
The world spreads out if we do so it.

This site was built to introduce various information in Japan that was needed by muslim people. As Japanese muslim is small minority of the population, number of people understanding Islam and halal-food is also few.
However many Japanese have a spirit ‘considering the other person’s position and respecting the other idea’. I think it comes from Japanese culture. In short, some Japanese can respect the thinking of way for Islam even if they are not Muslim. One of those Japanese; we try to introduce several information according to Japan into the world of Muslim.
Actually, we will pick up the matters of daily life of Muslims living in Japan, truism infomation including hotels and halal or muslim-friendly restaurants and so forth for Muslims coming to Japan, Japanese culture and products information to Muslims living abroad.
We will offer you safe, relief and joy due to reporting several information in sight of Muslim and respecting Islam. So we hope that this site let you enjoy something for Japan; Japanese culture, sight-seeing areas, products, and kindness of Japanese people what is called ‘omotenashi’.
We cooperate with JHA 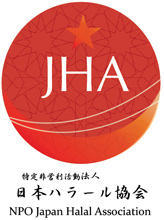 What is JHA?
JHA; NPO Japan Halal Association has aim to deliver Halal Living for every home, every Muslim in Japan.
As the body recognized by JAKIM; Department of Islamic Development Malaysia, and MUIS; Majlis Ugama Islam Singapura, it has been conducted certifying activities to Japanese companies. Though there are several certification bodies in the world, our certification standard is highest level. Because it has belief that “Making the robust base is most needed for building up halal culture in Japan.”
JHA consists of the expert members in various fields including following members.You come to know from the lining of these members, they seriously,religiously and enthusiastically deal with halal activities from a muslim’s standpoint.

Chairman: Remon Hitomi (Muslim name: Hind)
She established this association to help her compatriot Muslim to have halal living with security and relief in Japan. She has been seriously wanted muslim to know Japanese culture, technology, food and people’s kindness, and now she hopes good relation between Muslim and Japanese.

Director:Mohosen Shaker Bayoumi
He Graduated from the Al-Azhar University. Main subject was Shari’ah. Now he is the Shariah Board member,Sharia adviser.